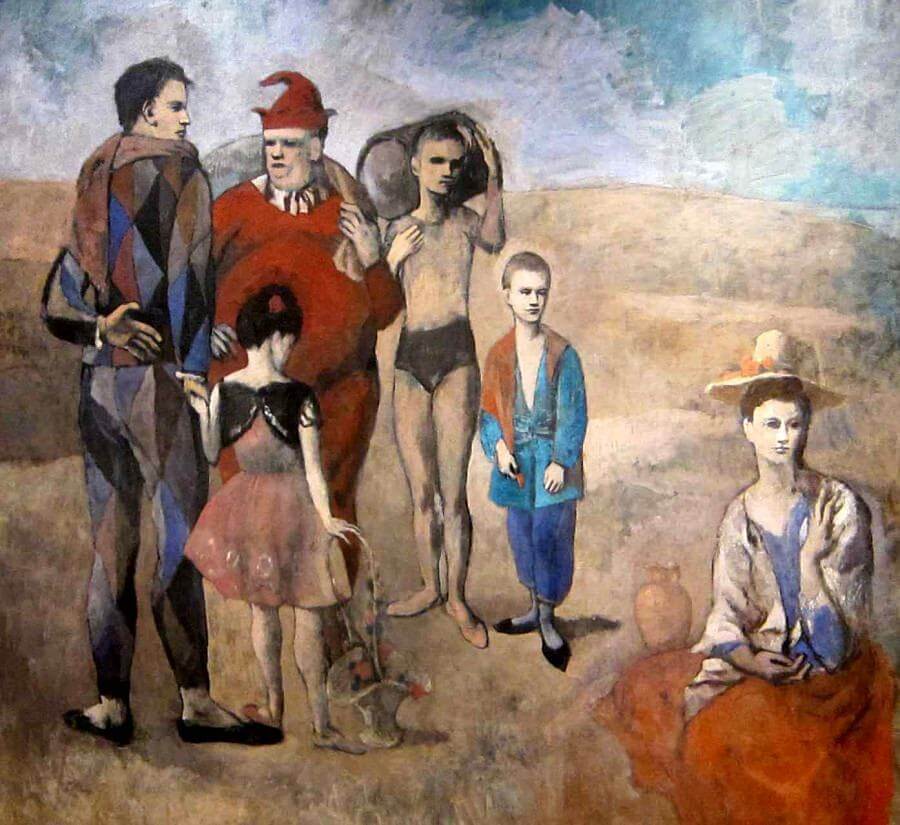 The Rose Period of Picasso lasted from 1904 to 1906 This period signifies the time when the style of Pablo Picasso's painting used cheerful orange and pink colors in contrast to the cool, somber tones of the previous Blue Period.

During these few years, Picasso was happy in his relationship with Fernande Olivier whom he had met in 1904 and this has been suggested as one of the possible reasons he changed his style of painting. Harlequins, circus performers and clowns appear frequently in the Rose Period and will populate Picasso's paintings at various stages through the rest of his long career.

While Pablo Picasso's Blue Period is far more popular with the general public today, his Rose Period is of greater art-historical importance. During his Rose Period, Pablo Picasso would, for the first time in his career, develop stylistic means that would become part of his Picasso Style, which made him the most important artist of the 20th century.

Then, in 1904, Picasso's work regains its romantic quality in a series of paintings in warmer colors, many of them in the color pink. Picasso's Rose Period paintings still show resignation, but no mourning and while his Blue Period paintings seem to serve to express Picasso's sorrow, his Rose Period style begins to lead a life of its own, in the artistic spirit of his time: it's not the subject and its content that matters most, but the painting itself. Picasso goes on to experiment in a style that renders his subjects anonymous, resulting in an artistic matrix of a person, rather than a person. See for instance Seated Female Nude (1905). The type of person is recognizable, not the person itself. The subject is characterized, not portrayed. This, although a step in the direction of abstract art, is not the most important feature of Picasso's Rose Period.

Picasso's Rose period breakthrough consists in the fluency of line he was beginning to achieve in 1904. Although the painting Family of Acrobats with Monkey (1905) is quite classical in style, its line is as suggestive as Picasso's later, more abstract work. This subtlety of line is Picasso's unique contribution to expressionism. In general one can say that there is a trade-off between subtlety and expression, and the directness of expressionism seems crude to the classicist. During his career, Picasso would continue to explore how to combine expressionism with classicism, a process for which he laid the basis in his Rose Period.

In 1905, at the age of 24, Pablo Picasso painted Boy with a Pipe soon after settling in Montmartre, France. It is an oil-on-canvas painting, which depicts a local boy who regularly visited Picasso's Montmartre studio, holding a pipe in his left hand and wearing a garland of flowers.

The Rose Period marks the end of a development in which Picasso finds his style as a figurative painter. His years in Paris had made him absorb the French culture, replacing the earnest of his Blue Period with Parisian elegance, see Girl in a Chemise, 1905. From his Rose Period on, Picasso would continue to produce figurative art occasionally, but it would never again be his main style.