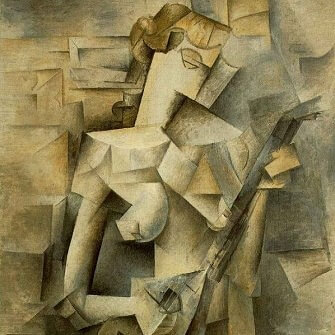 Analytical Cubism is one of the two major branches of the artistic movement of Cubism and was developed between 1908 and 1912. In contrast to Synthetic cubism, Analytic cubists "analyzed" natural forms and reduced the forms into basic geometric parts on the two-dimensional picture plane. Color was almost non-existent except for the use of a monochromatic scheme that often included grey, blue and ochre. Instead of an emphasis on color, Analytic cubists focused on forms like the cylinder, sphere and the cone to represent the natural world. During this movement, the works produced by Picasso and Braque shared stylistic similarities.

Both Pablo Picasso and Georges Braque moved toward abstraction, leaving only enough signs of the real world to supply a tension between the reality outside the painting and the complicated meditations on visual language within the frame, exemplified through their paintings Ma Jolie (1911), by Picasso and The Portuguese (1911), by Braque.

The technique of faceting originated from Georges Braques - it was his way to depict a natural object. Picasso didn't so much facet natural objects, but used the geometry of Braques' faceted paintings to create a style that was abstract in essence, almost pure abstract art. So cubism refers to the styles of both Braques and Picasso, although Braques' cubism has a recognizable figurative objective, while Picasso's cubism served as the link between Braques' style and pure the abstract art that followed from cubism.

Noteworthy is the work of Piet Mondrian, who linearized cubism in his 1912 Apple Tree painting, a process which ultimately led to the first really non-figurative paintings (or pure abstract art), from 1914 on. An important difference between Picasso and the cubist Mondrian was that Picasso never really gave up the third dimension. He played with dimensions, flirted with removing the third, but never became a pure abstract painter. So deeply his figurative upbringing was engrained (he was an artistic prodigy and well-rounded figurative painter at 15), that one of the main creators of abstract art never made it to this development's ultimate consequence: pure abstract art. In that sense Picasso wasn't the radical and revolutionary that, during his cubist period he appeared to become; his cubist period was followed (leaving his cubist converts bewildered) by his neo-classicism, a return to tradition. From there on his recognition and wealth grew and his role as a bringer of fundamental change in the art of painting was over.